The Frothy Monk Beer Cocktail: For the Devout Drinker

Inspired by eggnog, the Frothy Monk is a snifter full of holiday spirit.

Fall is my absolute favorite time of year for eating and drinking, when the plentiful pumpkin makes its way into every possible dish, hearty Autumn spices like nutmeg and cinnamon float atop frothy lattes and bushels of hand-picked apples transform into sizzling cider. There’s a warmth to sipping Fall beverages, savoring their rich flavors, loaded with nostalgia, and no holiday gathering is complete without the creamy coziness of a freshly-whipped batch of eggnog (I am emphatically against the store-bought milk carton varieties).

But other than classic recipes with brandy and bourbon, this Fall staple hasn’t seen much innovation since it matriculated from London pubs in the Dickens era. Now, I don’t know if eggnog actually originates from the UK, or the mid-1800s, but I delight in fantasizing about Charles Dickens sitting by the fire with a pewter mug of velvety emulsion as he pens scenes from my beloved novel, Great Expectations. And that was the inspiration for my ‘Frothy Monk’ beer cocktail recipe. A cocktail that coats the bones and warms the heart with a dash of whimsy reminiscent of the time of year when anything seems possible. 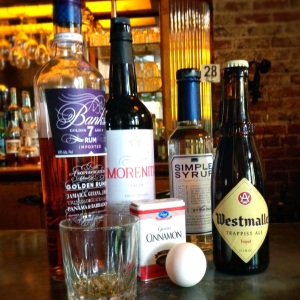 I wanted my creation to be frothy like eggnog, so I knew my recipe would feature a whole egg. And I knew I wanted to use a Belgian beer base to impart the Autumnal heartiness of brown sugar and molasses I was seeking so I chose the Westmalle Tripel, a trappist ale brewed in traditional fashion at an abbey in Westmalle, Belgium. (Hence, the monk reference. Yeah, I’m clever like that.) Then, I built the flavors from there, adding in Cardamom & cinnamon-infused rum, inspired by my Crafts and Draughts co-host, Jenn Wong, who is a spirits infusion master and Cream Sherry, a British barrel-aged dessert wine with a sweet, silky texture that makes this the perfect after-dinner digestif. A little simple syrup, a dash of Angostura bitters and some fresh, ground cinnamon, and you have a luscious beer cocktail that will have you believing in the magic of the season. Most likely because of the whopping alcohol content, but hey, you never know where inspiration’s going to strike, and if it’s good enough for Dickens…

Shake all ingredients without ice for thirty seconds, also referred to as a ‘dry shake.’ Add ice and shake again for thirty seconds or so until the egg is completely whipped (this could take up to two minutes depending on your biceps, or lack thereof). Strain into a goblet or brandy snifter and garnish with a few drops of bitters and a pinch of ground cinnamon.

In a small saucepan, lightly muddle cardamom pods and cinnamon stick with the butter until the pods begin to brown (and the waft of spices starts to permeate the kitchen). Add the rum and bring to a boil. Lower the heat and simmer for ten minutes. Let cool, then strain the spiced rum into a jar, cover and refrigerate for up to three weeks. For maximum results, I suggest preparing the infused rum a week before the cocktail so that all of the flavors have time to steep.

The Bruery and Tom Colicchio’s Craft, A Well-Crafted Pairing »
« The Real Best Burgers of L.A.

5 thoughts on “The Frothy Monk Beer Cocktail: For the Devout Drinker”